LANDex in the Caribbean: A Regional Approach

A regional LANDex training was held ahead of the 2019 Caribbean Urban Forum, held in Port of Spain, Trinidad and Tobago, from the 12-14 of June. The event brought together land monitoring and data specialists from the Caribbean countries of Belize, St. Lucia, St. Vincent and the Grenadines, Grenada and Trinidad and Tobago, and was co-hosted by ILC member CNULM, the Caribbean Network for Urban and Land Management. 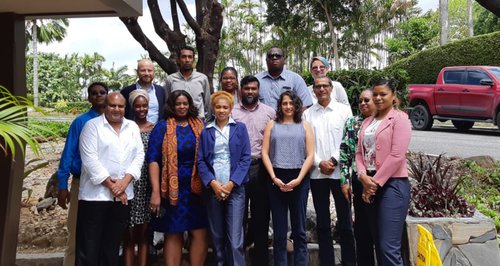 They did underline, however, the importance of land governance and its relevance to a number of related issues in the region – corruption, land grabs and concerns with a specific family tenure system, among others. In this context, the presentation of the LANDex tool was welcome and seen as an important opportunity to monitor land governance in the region.

Complexity of the Caribbean

Drawing from its long, complex history, the Caribbean region presents a series of complex land tenure and governance systems. Between islands, these governance systems can be quite diverse, and even within a single island or country – as small as they can be – there are cases of diverse tenure systems co-existing, intermixing, or running parallel to one another.

A Case to Customise LANDex

With this complexity in mind, and considering the specific concerns related to land governance in Caribbean countries, the region may present a case where the LANDex tool would be customised in order to integrate additional, region-specific indicators. While this is not a problem for LANDex – the tool was intended to include additional, 'non-core' indicators – further discussion with implementing partners in the region will be necessary in order to agree on the best way to do this.

During the meeting, some specific issues arose, adding valuable context on the Caribbean as a unique region: i) the importance of the urban nature of the Caribbean – small areas mean inevitable connection to urbanity, ii) the importance of water resources and water tenure and governance, iii) family tenure as a specific, important tenure classification in the region, iv) the recognition of gender-inclusive policies, targeting LGBT populations, for example.

In preparation for the LANDex workshop and training, several participants had already advanced the implementation of the LANDex tool in their respective countries. To valorise the work already done and in order to use these as case examples for other countries in the region, it will be important to follow up with these members and continue to support their work to the extent possible.

Furthermore, the Caribbean presents an opportunity to advance the only regionally-structured engagement strategy currently active among the ILC membership. Land monitoring is generally a national exercise, as many of the relevant laws and institutions are nationally-based, but considering the regional scope of activities in the Caribbean, LANDex implementation in the region would also be regionally-led.